Polycystic Ovarian Syndrome or PCOS is a gynecological condition related to a hormonal imbalance among females in their reproductive age. Women suffering from PCOS can have excess levels of male hormones, and prolonged or infrequent menstrual cycle/period. PCOS can severely affect the ability to conceive.

PCOS refers to having tiny bumps or cysts inside women’s ovaries which are small collections of fluid. Ovaries can fail to release eggs, regularly, due to inadequate hormonal signals from the pituitary gland. Absence of these signals leads to lack of ovulation.

PCOS is still idiopathic (cause unknown), but it is considered to be caused by an underlying disorder of insulin resistance, hyperinsulinemia which stimulates the increased production of ovarian androgen hormones.

If you are looking for in depth information on PCOS, check out the Mayo Clinic information plage..

Researchers have found a strong association between PCOS and subfertility. A research study revealed that each year, about 75% of PCOS patients visit gynecology clinics due to subfertility caused by PCOS. 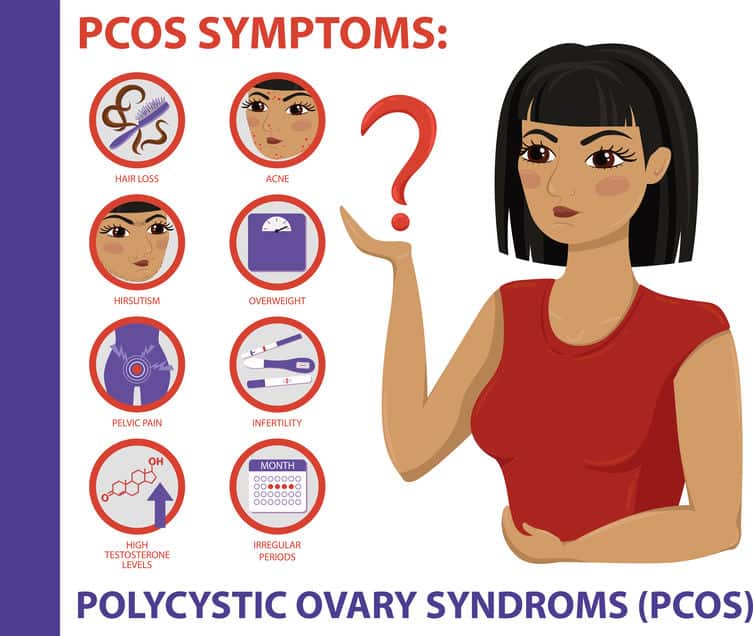 Women suffering from this hormonal disorder may show signs and symptoms of:

Early diagnosis and intervention of this disorder along with weight loss, can reduce the risks related to long-termed complications as heart diseases and type II diabetes.

Research-basedstudies have revealed that pregnant women with a history of polycystic ovary syndromeare at more risk as compared to females without PCOS. The researchers found that overweight women with PCOS had higher first and second stage β-cell impairment. Furthermore, obese and lean patients had more top inflammatory reactions compared to slender females without polycystic ovary syndrome.

Inositol is a vitamin-like substance which is inclusive of closely-related and naturally-occurring nine chemicals. Sometimes it is referred to as Vitamin B-8.

Regarding clinical use of inositol in PCOS, only two forms of Inositol, D-chiro inositol, and Myo-inositol are preferred.

PCOS is associated with IR (insulin resistance), which means that the body is incapable of responding appropriately to insulin (the body’s significant anabolic hormone) action.

According to a research study published in Endocrine Practice reported that 6 grams of inositol had shown significant results in managing PCOS. Furthermore, the research has also stated that inositol has also found very effective in treating metabolic disorders in pregnant women.

There are two significant functions of inositol in the human body.

In the past, insulin was defined as myometrial sugar, but in modern definitions, it is not considered to be a substance related to carbohydrates. Inositol is also referred to as vitamin B, but this also leads to controversy as it is not an essential substance and can be produced from human cells. According to several clinical studies, it has been proved that these molecules are directly involved with cellular signaling of insulin.

Regarding Polycystic Ovarian Syndrome (PCOS), one of the mechanisms associated with insulin deficiency is a deficiency in the concentration of inositol. In concurrency with researches, it has been concluded that D-chiro-inositol administration can cause a reduction in insulin resistance.

Myo-inositol is a second manager, which plays a vital role inthe signaling pathway of cells. Mainly, the role of Myo-inositol in polycystic ovarian syndrome pathway is related to improved sensitivity of insulin and an increase in intracellular (within cell) uptake of glucose.

On account of all these shreds of evidence, Myo-inositol is proved to be an insulin sensitizer mediator. This supplement is an effective and safe option for patients with PCOS. Studies have demonstrated Myo-inositol to be having safe profile even if administrated as 12 g per day for an improvement in fertility of disease.

In PCOS, insulin resistance is mainly due to problems associated with inositol metabolism within the body. 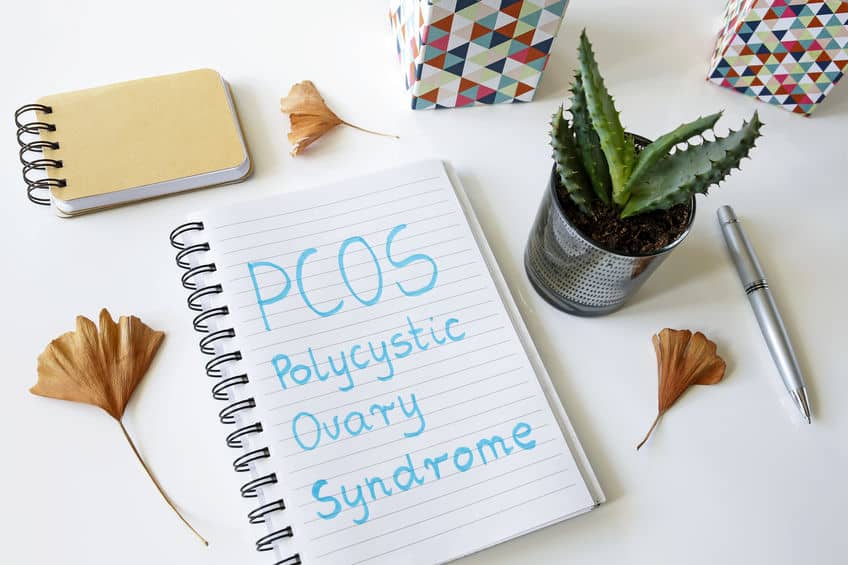 According to several research studies, inositol supplementation can help to restoreregular ovulation and normal menstruation in women suffering from this hormonal disorder.

According to a study published in International Journal of Endocrinology, about 15 % women had an improvement in pregnancy rate, and 70 % of women had improved and regular ovulation with the supplementation of inositol in combination with folic acid.

According to different research studies, inositol is proved to be clinically beneficial in following aspects:

Dosage of inositol supplements is different for different disorders. In patients with Polycystic Ovarian Syndrome, recommended dosage as per clinical researches is:

In the case of gestational diabetes and for control of blood sugar levels, recommended guidelines for dosage are:

PCOS can cause complication of type II diabetes; for this reason, the recommended dosage for this supplementation is:

In case of complications associated with a mental health condition, the recommended dosage is:

Inositol is possibly safe when taken orally for most of the adults but still can cause mild to moderate symptoms of dizziness, headache, stomach pain, nausea, and tiredness.

Orally, inositol is safe for children of ages between 5 to 12 years for about 12 weeks and in infants with severe conditions of lungs such as ARDS (acute respiratory distress syndrome) for about 10 days. Whereas, inositol supplementation is unsafe for use in infants with a disorder of ARDS for more than 10 days.

For women during pregnancy, it is safe to use inositol orally, but for lactating women (breastfeeding), oral intake of inositol supplementation can be unsafe, so it is better to avoid its use for staying at safe side.

Females with polycystic ovary syndrome frequently have little painless cysts in the uterus in addition to elevated levels of testosterone and other hormones which could result in irregular or absent menstrual cycle, infertility, weight gain, acne or excessive hair on the body and face. The investigators discovered that polycystic ovary syndrome associated inflammation might be the connection between diabetic condition.

In women with PCOS, sugar level rises following a meal stimulates inflammation, that does not usually happen in ladies without polycystic ovary syndrome. This inflammation hinders the capability to secrete insulin which contributes to resistance and can be an early phase of Type 2 diabetes. Additionally,  patients have poorly working β-cells. These cells are present in the pancreas, which produces insulin. 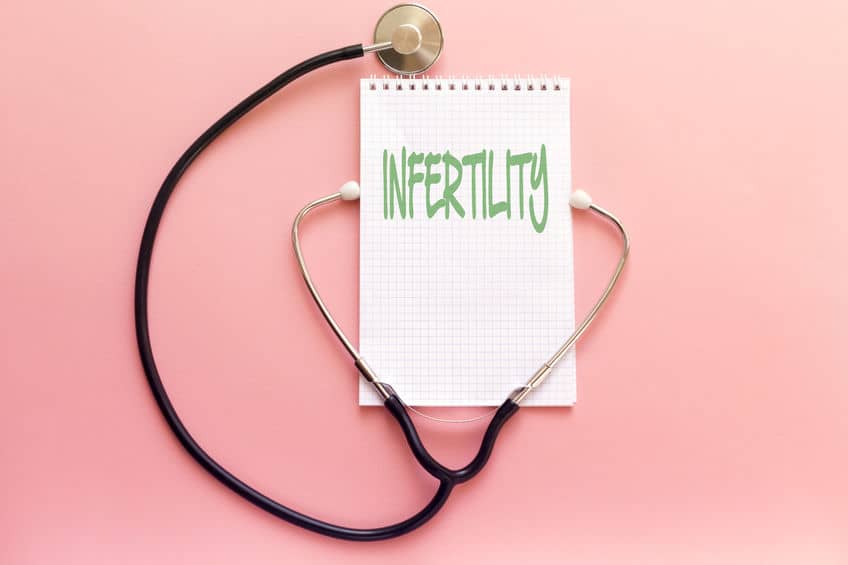 Other supplementations used to treat PCOS:

In pre-diabetic patients, metformin can cause a slowed progression of diabetes type II and help in weight loss.

Zinc is one of the 24 micro-nutrients which are primarily needed for existence due to its behavior of enzymes regulation, and anti-oxidizing action. Zinc can help in improving the symptoms associated with PCOS like acne, management of weight, ovulation, blood glucose regulation, and insulin sensitivity.

According to several research investigations, zinc is found to be an effective depression-resistant intervention, as depression is the most common mental disorder associated with hormonal imbalance or PCOS.

Composition of fish oils consists of EPA which is considered to be most effective for the treatment of depression while the combination of DHA with EPA can potently decrease the levels of triglycerides in people with risk of developing heart-related diseases.

PCOS automatically puts an individual on the risk of developing DHA deficiency on account of its chronic inflammation which is a chief risk factor for it. This leads to several complications, as DHA along with AA is one of the most vital nutrients needed for good health.

Fish oil consists of omega-3 and omega-6 fats which should be consumed in optimal concentration for normal functioning of the body and hormonal regulation.

Melatonin is a vital hormone produced by the brain to regulate the night sleep and provide high-quality sleep. Sleep disturbances and insomnia are found to be closely related to PCOS /disorder. Melatonin supplements can help patients suffering from sleep-related troubles due to PCOS. Due to melatonin supplements, patients can have 7 to 8 hours of sleep comfortably.

One of the most exciting supplements used for treating PCOS is probiotics. Probiotics are the cultures of gut bacteria to treat the illnesses in which conventional drug therapies have failed to benefit or deliver the results like PCOS.

According to scientific researches, PCOS alters the gut health by causing a gut imbalance that’s why administration of healthy gut bacteria can help in the regulation of hormones and help in fighting with the polycystic ovarian syndrome. Species of Bifidobacterium, Streptococcus, and Lactobacillus bacteria are found to be beneficial in PCOS.

Curcumin is a pigment which is yellow in color, and commonly present in turmeric. Curcumin has some anti-depressant and anti-inflammatory properties. PCOS causes a low grade and chronic inflammation which leads to different symptoms of unintentional weight loss, infertility, cardiovascular diseases, acne, and hirsutism which can be lowered by treating inflammation.

PCOS is a disorder related to hormonal imbalance in women of reproductive ages caused due to imbalance of pituitary signaling and increased resistance to insulin. PCOS can lead to different complications as diabetes type II and heart-related issue. Inositol is a potent supplement which can be used to treat PCOS if taken in appropriate dosage.

Other supplements for PCOS are also available, which can help in lowering the symptoms and disturbances related to PCOS.Polycystic Ovarian Syndrome is a gynecological condition that can not only decrease the chances of pregnancy, but it can also lead to various health complications associated with pregnancy.